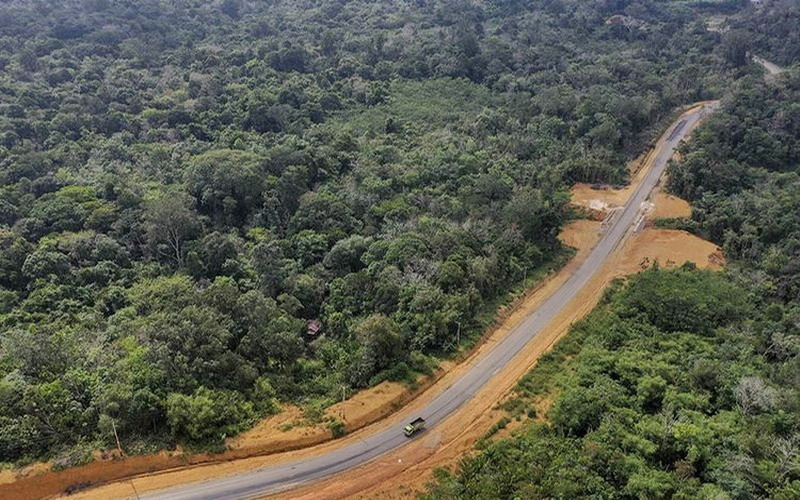 UNPAK - President Joko Widodo (Jokowi) launches a plan to move the national capital in Jakarta. The reason is that Indonesia must have a big vision of the next 10 to 100 years.

Jokowi views, congestion, dense population, environmental pollution and flooding experienced by Jakarta is part of the reason for moving the capital.

The discourse of moving the capital has actually been going on since the beginning of independence. In fact, in 1946, there had been a transfer of the capital to Yogyakarta due to military aggression.

Not only that, in 1948, Soekarno-Hatta was captured by the Dutch, so the country's capital moved emergency to West Sumatra. On August 17, 1950, the new capital returned to Jakarta.

The rest, the transfer of the capital city became the discourse of every government regime.

During the Soeharto Government, Jonggol was rumored to be the capital. This is suspected as a result of the issuance of Presidential Decree No. 1 of 1997 concerning the Coordination of Development of the Jonggol Region as an Independent City.

Likewise, in the administration of President Susilo Bambang Yudhoyono (SBY), the discourse on moving the capital began to be seriously discussed. At that time, reported by the media, SBY offered three options.

Multi dimensional
For writers, the discourse or study as well as the effort to move the national capital is a healthy discourse.

However, when discourse, study or effort is to be realized, mature, rational and democratic considerations are far more important than being hasty.  There are a number of things that need and are urgent to think about.

First, from the legal dimension. Starting from the constitution (1945 Constitution) to various sectoral laws and regulations, laden with allusions about the national capital.

Until the special provisions concerning the national capital itself in Law Number 29 of 2007 concerning the Administration of the Province of DKI Jakarta as the Capital of the Unitary State of the Republic of Indonesia.

So, it would be wrong if the matter of moving the national capital was the sole authority of the President as the head of state.

Because, when they want to be operational, the Law Number 29 Year 2007 must be replaced. It is clear that constitutionally it must involve the DPR (Article 20 of the 1945 Constitution).

Except if it is published in the form of a Perppu which of course must also meet the category of urgency (Article 22 of the 1945 Constitution).

Thus, from the legal dimension requires an effort to inventory, study and amend legislation related to the national capital.

It should also be noted that the regional government of the capital city has specificities in its governance system such as DKI Jakarta.

The Governor has the authority to appoint and dismiss the mayor / regent with consideration of the Provincial DPRD from civil servants (Article 19 of Law Number 29 Year 2007).

This is different from other regions through regional elections.

Second, the dimension of democracy. Democracy is not merely electoral. Once the president is elected, everything is left to the president to determine policy.

People just watch. Later, the next five years will be involved again through elections.

Such thinking is certainly very naive. Because, people's sovereignty does not stop during elections. However, afterwards, the people have the right to have an opinion. Even expressing certain policies. All are guaranteed constitutional and legal.

The problem is, often this understanding has a deficit. So not surprisingly, a philosopher Jurgen Habermass initiated the issue of deliberative democracy. Democracy which wants to radicalize the process of public participation in public space is deeper.

According to F Budi Hardiman (In Muzzle Oligarchy, 2013), deliberative democracy requires a process of consultation, weighing and arguing among citizens in civil society for public policy making carried out deeply.

Because, for F Budi Hardiman, there are many legislative products in Indonesia that do not adequately involve public deliberation so that citizenship awareness is very thin.

Quoting Habermas, for him, the real issue of democratization does not lie in the moment of the election, but rather in the time between the two elections.

Through participation in public deliberation the concept of deliberative democracy above, it will strengthen the roots of the democratic ethos from below so that the pragmatic elite can be rejected early on.

Based on the arguments above, the pros and cons of moving the capital must be laid on the table of public space.

The cost of displacement, which reached nearly 446 trillion, needs public scrutiny. Including the idea of ​​involving the private sector in the construction of government buildings in the new national capital, it needs to involve experts.

Is such an idea rational or not. Given the private sector in this case the entrepreneur works based on profit instincts.

What about the idea of ​​economic equality that some experts argue, so far it has been pursued through infrastructure projects that extend to the outer islands of Java.

Is this not paradoxical with the spirit of moving the country's capital to economic equality that has actually been taken - among other things - with the infrastructure project.

So, for the public, it is not a matter of moving or not moving the capital. However, how much choice is offered to become a public discourse.

Likewise, various associated impacts. Like, how big the bureaucracy can be adaptive quickly when the capital is moved. Is there an influence on public services for example.

Of course an in-depth study of the problem will help. Not to mention the variation of the displacement like what. Did take the Malaysian model that the capital of the country remained in Kuala Lumpur but the center of government was moved to Putra Jaya. Things like this become strategic to discuss.

Hope
Indonesia is not short of problems. Economic growth is still in the range of 5 percent. Regional head corruption never stops, even in a place that is suspected to be the location of moving the country's capital.

Poverty still needs to be resolved even though the trend is declining (9.41 percent in March 2019).
Not to mention the challenge of food independence with all its import debates. However, the various problems above do not mean we lose hope.

The discourse on relocating the capital city is part of the hope to build a better Indonesia. All that remains is the homework on how the aspects of legal considerations and public participation above become an inseparable part of the discourse.

That way, citizens' sense of belonging will increase because they are involved in making policies which will eventually be wrapped in legal products.

Flooding, If It Happens, What Can We Do?
Pakuan University Holds Vocational Training for UMKM in Bogor Regency
Dr. Entis Sutisna,M.Pd: E-Learning Process Efforts Teaching and Learning Activities Continue Underway Corona
Unpak Chancellor Distributes Assistance to Landslide Victims in Nanggung
Followed by 25,000 Gamers, This is the eSports League Winner with IDR 3 Billion Prizes